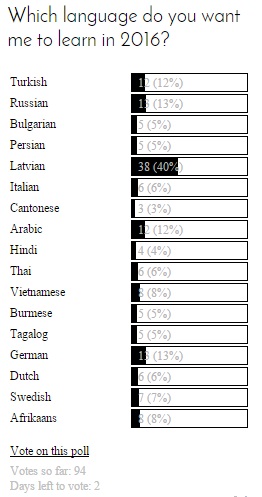 Two days left until the closing, and at the same time, we shall celebrate the new year with joy for learning a new language. I put up polling about language that I would be recommended to learn in 2016. I listed out some of the languages that I have encountered and have once interested me, however, I did not manage to learn or did not keep up with the learning. I personally thank 94 voters that have participated in this polling.

Latvian is winning so far by 40%, however, it seems peculiar to be the absolute winner. So, let's put Latvian aside and analyze deeper into the details. German and Russian stay at the same position with 13% of supporters each. While Turkish and Arabic come next with 12% of supporters each. The vote is completely anonymous, thus, the reason behind every choice is with the voters. Nevertheless, please allow me to point out my opinion towards both languages. Note that the final result will be announced in 2016!

Germany as one of several important countries in the EU, and as a country that has made a remarkable decision recently by receiving about 800,000 refugees, is certainly cannot be underestimated. German is an interesting language that utilizes compound words very often. It is one of several popular European languages, learned by not only Asian but also people from other continents, such as Europe or America. If you know "babysitten" and "kindergarten", those are German words. If you are new to grammatical cases, get ready because there are 4 cases in German.

My experience with German: I learned German for about a year in high school in Indonesia (taught in the Indonesian language), and did not learn it anymore until a few months ago when I enrolled myself into a basic German class in Taiwan (taught in Mandarin Chinese). Everything was just basic, so I learned only basic phrases, such as greetings, self-introduction, and a little bit of grammar.

Who doesn't know Russian, a language that has played a major role in history, and is spoken/ understandable throughout some parts of Europe and Asia. I personally have met Russian speakers in Taiwan from Russia, Ukraine, Uzbekistan, Latvia, Mongolia, Tajikistan, Slovakia, and even, China!

If 4 grammatical cases are not challenging enough for you, Russian offers 6 cases! Beware of false friends, don't ask for a магазин, magazin thinking that you will get a magazine. Instead, ask for a журнал, zhurnal because магазин, magazin means a shop.

My experience with Russian: I spent only a few weeks of learning Russian before, and my biggest achievement is being able to read Cyrillic. Russian grammar is daunting, however, I think that languages with cases usually have freer word order in the sentence.

One example of this in Russian is мама видит кошку (Mum sees the cat) and маму видит кошка (The cat sees mum). You can see the word "mum" is placed in front of both sentences, but one is a subject (мама), and another one is an object (маму).

One common question that people ask online is whether Turkey is considered more to be European or Asian. Whatever it is, Turkish language had left its mark in both continents. It is one of the most popular languages in the world with more than 70 million speakers. The Turkish language was once written in Arabic script before Mustafa Kemal Atatürk replaced it with Latin alphabets in his efforts to modernize Turkey. Some European countries have large Turkish immigrant communities and the most populous being in Germany.

My experience with Turkish: What occurs in my mind when hearing the word "Turkish" are Turkish kebab and Turkish ice-cream. I went to a Turkish restaurant in Taipei city a few weeks ago, you can see my pictures on Cuisinee blog. I read about Turkish for a while but did not really put efforts into learning it because of its 6 grammatical cases.

Being spoken not only in northern Africa and the Middle East but also spoken/ used to some extent in Muslim communities around the world. Being a country with the most Muslim in the world, Indonesian language has adopted over 2,750 loanwords from Arabic. There are several types of Arabic, such as Classical Arabic used in Qur'an and classical literature, Modern Standard Arabic (MSA) used in written materials, and dialects used in spoken language that differ from one country to another.

One of the remaining two Baltic languages, and is a close cousin to Lithuanian but both languages are not interchangeable. It is written in Latin alphabets and the language sounds as beautiful as the women (according to me!) Nouns in Latvian express the categories of gender, number, and case. There are seven cases in the Latvian language.

Did you know that Latvia is just as old as me? and its population is about the same with that in my hometown, Medan city?

My experience with Latvian: Back in 2012, I sort of challenged myself to learn Latvian after having been introduced by a Latvian friend in the university. I managed to remember some basic phrases, but its complex grammar holds me back from learning even until now! However, I fall in love with the sound of the Latvian language.
arabic german introduction russian story turkish