However, the Hokkien language used by the Medan Chinese is mixed with some Teochew words, such as "gai" and "hiam", the former meaning "ge (quantifier)" ​​and the latter meaning "spicy", this is because Medan also has a large number of Teochew people.

According to the national census data released by Indonesia in 2000, the Chinese account for about 11% in Medan, but the local Chinese generally believe that the actual percentage of the Chinese population should be as high as 20% to 25%.

The ancestors of the Medan Chinese were mostly Chinese who departed from Fujian and Guangdong provinces in China in the 1870s and went to the tobacco plantations in Northern Sumatra to work as coolies; the gateway of Medan was also closely related to the large-scale tobacco planting industry. Therefore, the Chinese coolies are one of the heroes of Medan's port gateway. Many Chinese coolies stayed in the local business after breaking free, and regarded Medan as their new home.

During the Dutch colonial period and when the first president Sukarno was in power, Medan Chinese established many hometown associations, clan associations and Chinese school alumni associations, mainly to take care of each other and keep in touch with their hometown or alumni. The more active Chinese groups include Huizhou Association, Teochew Association and North Sumatra Medan Chinese Middle School Alumni Association. These Chinese associations hold Chinese cultural activities from time to time, and they also arrange for members to gather and connect with each other on festivals. Medan Chinese also founded a number of Chinese-language newspapers during this period, including 民主日報 (Democracy Daily),  民報 (Min Pao), 華僑日報 (Overseas Chinese Daily), 南洋日報 (Nanyang Daily) (later renamed 新中華報 (New China Daily)), 蘇島日報 (Su Dao Daily), and 新中國報 (New China Daily). Among them, Democracy Daily supported the Indonesian national independence struggle during the Indonesian Revolutionary War (1945-1949), and after the founding of the People's Republic of China, it devoted itself to publicising the Chinese government's policy on overseas Chinese affairs, defending the rights and interests of overseas Chinese in Indonesia, and promoting the friendly relationship between China and Indonesia.

However, after Suharto came to power, the Indonesian government implemented a policy of forced assimilation of the Chinese. The Chinese were not allowed to openly celebrate traditional Chinese festivals and use Chinese language in public. If the Chinese associations want to continue their activities, they must transform into providing funeral services and engaging in charitable activities, Buddhist activities or groups focused on health and sports as well as having the obligation to change the groups names to non-ethnic names. In addition, the government has also closed all Chinese schools and most Chinese-language newspaper offices, allowing only the Chinese-language newspaper 印度尼西亞日報 (Indonesia Daily), which acts as the mouthpiece of the government, to operate. The newspaper Indonesia Daily is based in Jakarta. All news and articles published in the newspaper are translated from Indonesian to Chinese and are strictly censored.

Under this circumstance, all Chinese schools and local Chinese newspapers in Medan were closed. In order to continue their activities, many Chinese groups had to transform into groups that met the conditions set by the government. For example, the Huizhou Association was transformed to provide funeral services, and it became a group that served and focused on charitable activities, and changed its name to the Medan Angsapura Charity Foundation (Yayasan Sosial Angsapura Medan, or Yasora Medan for short).

Therefore, Suharto's reign can be said to be a dark period for Indonesian Chinese culture. But this dark period came to an end when Suharto stepped down in May 1998. The post-Suharto regime, especially the Abdurrahman Wahid regime (1999-2001), revoked many decrees that discriminated against the Chinese and Chinese culture, allowing the Chinese to openly learn and use the Chinese language, openly celebrate Chinese traditional festivals, the establishment of the Chinese groups and the establishment of Chinese newspapers.

It is worth mentioning that most Chinese groups in Medan hold meetings in Hokkien, and the minutes of the meeting are recorded in Chinese and Indonesian, which is different from many Chinese groups in Jakarta, Surabaya and other areas that only use Indonesian when meeting.

In addition, the Indonesian North Sumatra Chinese Community Charity and Education Association (referred to as Hualian), which is composed of dozens of Chinese groups and figures, established a private institution of higher learning in Medan in 2008 to provide a bachelor's degree in Chinese, namely Asian International Friendship College (Sekolah Tinggi Bahasa Asing Persahabatan Internasional Asia, referred to as STBA-PIA). The purpose of the school is to promote Chinese and Chinese culture, and cultivate Chinese talents. The funds come from a number of Chinese groups in northern Sumatra, and Malaysia's Sin Chew Media Group.

The school is assisted by South China Normal University to prepare teaching courses and provide teachers. In addition, the China Overseas Exchange Association and the Guangdong Overseas Exchange Association also assist the school in finding teachers, and the salaries of all Chinese lecturers sent to the school are paid by the Chinese government. In 2012, the school signed a memorandum of cooperation with Penang Hanjiang College to conclude sister colleges. Therefore, the establishment and operation of the Asian International Friendship College can be said to be the result of the cooperation between Indonesia, Malaysia and China.

So far, Asian International Friendship College is the only Chinese community private institution of higher learning in Indonesia that offers a bachelor's degree program in Chinese.

In addition, the Medan Chinese society established five Chinese-language newspapers after Suharto stepped down, including 印廣日報 (Yinguang Daily), 蘇北快報 (North Sumatra Express) (formerly known as 華商報 (Huashang Daily), 棉蘭早報 (Medan Morning Post), and 蘇北日報 (North Sumatra Daily)), 訊報 (Xunbao), 好報 (Haobao), and 正報 (Zhengbao). Among them, Yinguang Daily was suspended in December 2014 due to low sales and huge losses. However, it resumed publication under the name of Zhengbao in February this year, and became the sister newspaper of a mainstream Indonesian language newspaper run by Medan Chinese called Analisa Daily.

Poor relationship with the indigenous people

In this residential area, the Medan Chinese feel like they are in their hometown, conversing with each other in the most familiar Hokkien language and enjoying traditional Hokkien food, making their lives self-contained. They are also incompatible with the Jakarta Chinese who do not understand the Chinese language, so there is little communication between the two.

In order to reduce the local indigenous people's suspicion of the Chinese and improve the relationship between the Chinese and the indigenous people, it is really necessary for the local government to actively address the problem of inequality between the rich and the poor, and civil organisations must also hold various inter-ethnic dialogues and activities to promote inter-ethnic understanding.

Photo by raja meliala on Unsplash 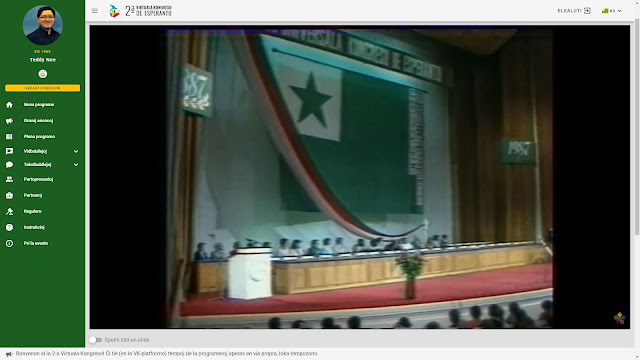 July 16th Before the official opening of the Virtual Congress, I had already joined inside to watch an old film about Esperanto in Warsaw 100 years after the public introduction.

Let's meet Lindie Botes from South Africa Tumblr | Twitter Could you tell us about yourself, including the languages you know? I was born in Pretoria, South Africa. Because of my father’s job, I grew up in Paris, Pakistan, Dubai, and South Africa. Currently, my parents live in Japan. At home, I speak Afrikaans. At English schools in various countries, I learned Urdu, Arabic, and French as subjects. In 2009 I became interested in Korean and this spread to Japanese, Mandarin, and other Asian languages.