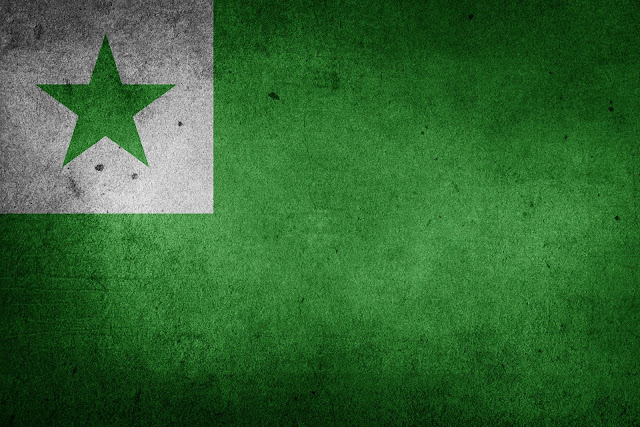 It is Esperanto, an artificial language created by a Polish oculist 125 years ago. What makes it special is the fact that Esperanto is the most spoken artificial language in the world. I began to learn it on May 20th this year after watching several videos about the history of Esperanto and its international society. It is so easy that many Esperanto speakers can learn it up to conversational level in just a few months.

I read Libera Esperanto-Libro in the beginning and I began to exchange messages (by the help of a dictionary) in Lernu after a week of study. Lernu is a widely known Esperanto learning website. It provides learning materials of various levels and also a dictionary, forum, and chat box. After 3 weeks of study, I felt quite confident to join Esperanto groups in Skype to chat or occasionally join the teleconference. I wrote my second short article in Esperanto after 2 months of study.

It has been 5 months since I began to learn Esperanto. I am going to show you my learning method and achievement after learning Esperanto for 5 months.

Although I do not practice speaking much, I have been using Esperanto in writing, listening, and reading. Writing is one of my methods in language learning. Thus, I have created an Esperanto blog. It is hosted by Ipernity, a social networking site that is widely used by the Esperanto - speaking community. I usually translate my English articles into Esperanto in my Esperanto blog.

I received a surprising message yesterday morning. Asocio Esperantista De Rio-De-Ĵanejro (AERJ) or the Association of Esperanto in Rio de Janeiro has published an Esperanto article that I sent in early October, despite learning the language for less than 5 months. The article entitled "Kial Ni Bezonas Fremdajn Lingvojn?" or "Why do we need foreign language?" on the fourth page of PDF document. Click here to read...

What do you think about Esperanto language and constructed language? Do you know any constructed language that is not featured yet? Thanks for reading. Feel free to share this article if you like. If you have any opinions, please leave a comment. I love reading them.
artificial esperanto introduction online story