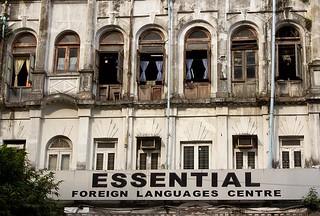 What is the reason behind learning a foreign language? Some of the popular reasons that I can recall are a job requirement, school mandatory class, and for traveling. I guess I have never mentioned any reason behind my foreign language learning, have I? So here you are. I am going to write about those languages that I have learned and the new languages that I want to learn as well as (of course) the reason.

The languages that I have learned:


1. English
As many people from around the world, I also learn English for years in school. English is currently (still) an international language. Anybody, regardless of their nationalities and races, speak English with one another. This is crazy! Thus, it makes English the most popular language being sought by people, from student to office workers. There is a saying (by me), "It is not surprising to see someone speaking English as a foreign language nowadays" because everybody is learning it! English is the first foreign language that I learn from a very young age, preschool age.

3. German
There are two extracurricular language classes in the high school - Japanese and German. With my language background in English and Indonesian, which use the Latin alphabet, I chose German. I learned it in my last year of high school, and it was so interesting. The teacher is Indonesian but she looks like Caucasian-mixed. Anyway, I have never questioned about her background. I do not continue my German after my high school graduation, and you know the consequence, I have forgotten much of the language. However, I still remember four sentences that I learned at the beginning meeting of the German class.

4. Korean
I have many Korean friends at the university. Korea is one of the top 3 countries that participate in the student exchange program with Ming Chuan University in Taiwan. Thus, there was a big opportunity to learn Korean language. The Korean language is also quite popular among Taiwanese since the booming of Korean dramas and Kpop culture. I know how to say some basic phrases, such as "Where is the toilet?", "How much is this?" and "What is your name?" but I do not continue to learn it because I lost interest in continuing it. Maybe I shall continue in the future.

5. Spanish
Spanish is one of several important languages in the world and it has many speakers, although it still cannot beat the number of Chinese and English speakers. The influence of Portuguese language into the Indonesian language has helped me in learning the Spanish language, especially in the pronunciation. Apart from the pronunciation, Portuguese also has contributed many words that are similar to Spanish into the Indonesian language. I have experienced this while going out with Spanish-speaking friends and we found out that we have many words in common. By the way, almost half of the students in my class speak Spanish!

6. Cantonese
My maternal grandma speaks Cantonese, so I am 1/4 Cantonese. I still remember clearly that I used to learn Cantonese every time I visited her house on Sunday. Besides, I have relatives in Hong Kong. Therefore, I think that the Cantonese language is deeply related to me. With my language background in Chinese and Fujianese, it is easy to understand Cantonese. The major difference is only the tones. There are Cantonese speakers in my hometown, in Kuala Lumpur (capital city of Malaysia which is just a 1-hour flight away from my hometown), and perhaps in Singapore (which is close to my hometown).

7. Latvian
I have one video of me singing in Latvian that went viral in Latvia! This is so surprising but also exciting for me. The reason behind making that singing video was I play guitar and I like to cover foreign language songs. Then, I tried Latvian and I got many Latvian acquaintances in just seconds. I decided to learn Latvian after that so I can communicate with them, but many of them speak English too. My Latvian friend at the university is the one who introduced the language to me. I know several basic phrases from the phrasebook and Latvian culture, festivals, and songs always fascinate me.

8. Russian
Later, I found out that many Latvians also speak Russian because of the historical relation and I had several Russian classmates at the university. Russian is an interesting language with its unique accent. I know how to read the Cyrillic although my pronunciation still needs lots of improvement. Besides Latvia, I have also found out that there are many people outside of Russia that speak the Russian language, either as a primary or secondary language. They are, but not limited to from Georgia, Kazakhstan, and Mongolia, also because of the historical relation. There is a Russian restaurant around here and it even gives me more motivation to learn the language, especially learning about the food.

9. Dutch
I am lucky to have a Dutch classmate who later turned to be my Dutch tutor in the university. Indonesia has a long historical relationship with the Netherlands, so the Indonesian language also has influence from the Dutch language. With my language knowledge in German, I can easily recognize some Dutch words. During the class, we also discuss the history of both countries' relationship. I learned Dutch only for around 4 months, and then I need to stop because of focusing on Chinese exam.

The languages that I want to learn:

I have several languages in mind; however, let me just show you the one that (I think) will be easier for me to learn in terms of my previous language knowledge and the available opportunity.

Portuguese is an interesting language. It sounds to me like Spanish with a unique pronunciation. I have Portuguese-speaking friend at the university too. Two major reasons for me to learn Portuguese are:

What is your reason behind learning a language? Thanks for reading. Feel free to share this article if you like. If you have any opinions, please leave a comment. I love reading them.