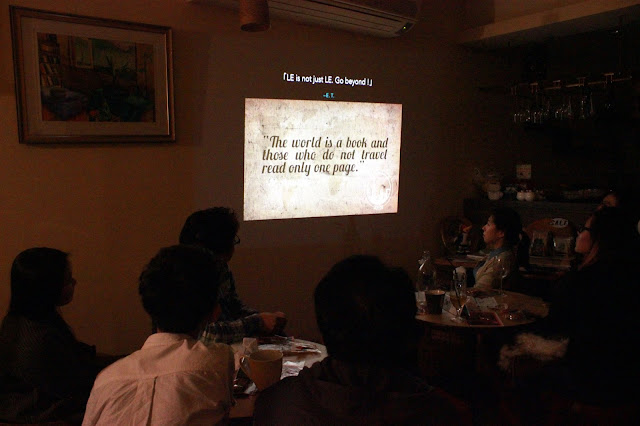 I just arrived home not long after participating in a weekly language event that I always join. If you did not know about the event, please visit the Polyglot Cafe website, the information is available in Chinese, English, and Japanese. It was fun as usual meeting new people and practicing languages at the same time. It is not surprising to know someone that speaks 3, 4, or even 5 languages or more.

My purpose of joining the event is to practice Spanish, however, due to some reasons, I was appointed as the leader for Chinese table. All participants are grouped into tables based on the languages they are practicing, such as English table, Japanese table, Spanish table, etc. It was my first time to be a table leader. I basically just need to keep the conversation going in Chinese, and to encourage all participants to speak Chinese. We had participants from USA, New Zealand, Australia, and Turkey in the table.

Our conversation began with basic topics, such as self-introduction, purpose of coming to Taiwan, and the duration of learning Chinese. We even talked about the political situation between Taiwan and China, but we did not go deeper into the issue since it is a sensitive topic. Nevertheless, it is understandable if foreigners are curious about this topic since it is not usually openly discussed and many foreigners confused "Taiwan" with "Thailand".

I got the chance to share my experience in language learning, not only about learning languages in general, but also about learning a specific language, which is Chinese in this case.

Listening is one of my methods in language learning. I listen very often, even when I do daily chores, like cleaning my room or programming. I introduced two websites; one for watching dramas from around the world called Viki, and another one for listening to radio channels from around the world called TuneIn. Since I do not usually have much time to watch, so I often listen.

I definitely recommend listening because you can learn not only the accent, but also speaking style. You may then realize your speaking style will resemble what you always listen. For instance, if you listen very often to Mexican, you will tend to speak like a Mexican, rather than, let's say, a Spaniard. If your level is high enough, you can also pick up some slang words.

2. Describe the object rather than translating

Do you realize how often we say the same phrases everyday? These phrases are like "good morning", "where are you going?", "where is the bathroom?", etc. Instead of learning phrases that you seldom use, it is better to invest your time in learning phrases that you often use daily. Jot them down in the language you are using to learn, and in your target language. You do not even need to memorize, just read it regularly, it will stick in your mind.

My favorite book for language learning is not textbook that students use in the class, but travel phrasebook. This type of phrasebook comprises situations that we will likely encounter, such as ordering food or asking the time. Remember three magic words that will let you bypass any obstacles: "thank you", "excuse me", and "sorry".

I find speaking easier than writing. This is because you need to have good grammar in writing, that is why we have what is called Professional Writing (I had this subject at school) A native speaker cannot even write well without training, so don't feel bad about yourself.

Speaking is easier because we always use gestures and expressions, they help to convey our messages to the listeners. For instance, if I cannot say the name of the food I want to order in the restaurant, I can just point at it (if pictures are available), or you might say "he go school tomorrow" and you can still be understood despite having bad grammar.


5. Learn how people say it

Accept the way something is said rather than arguing that it should be said in another way. When a Spanish speaker says "tengo hambre", that means the person is hungry, despite the literal meaning in English is "I have hunger". When a Russian speaker says "я студент (ya student)", that means "I am a student", despite the literal meaning is "I student". When a French speaker calls "potato" as "pomme de terre" or literally means "earth apple", just accept it as what it is although it does not make sense to you or sounds ridiculous. You might be more surprised when you learn that Chinese speakers call "cellphone" as "手機 (shǒujī)", which means "hand machine" literally.
method speaking story