My Name In Several Scripts/ Languages 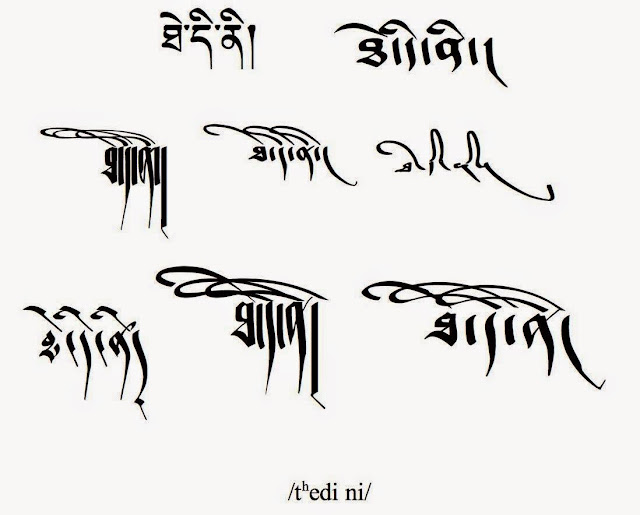 Here is "Teddy Nee" in various Tibetan scripts, the first being the usual capital one (uchen or "ucän") and the others "ume" cursive variants (chuyig, drutsa, and tshuthung, among others).

Did you realize that most of the Asian languages have their own writing scripts, whereas European languages adopt Latin script? I find it very interesting. In fact, I am so interested in the aesthetic aspect of the script, especially that with curves and written as if it was drawn.

I am also amazed by how these writing scripts were created, by the fact that there are plenty of writing scripts in this world, and also by how Latin scripts eventually "conquered" most languages, especially European languages.

There are many language groups that I am following in Facebook, and one of them is called Polyglots, which has more than 18,000 members. I posted a question about writing my name, Teddy Nee, in different scripts, and surprisingly, I got many interesting comments.

Here is how "Teddy Nee" written in different scripts/ languages (I copied directly from Facebook group comments, please let me know if there are any mistakes.)


Are there any scripts not listed in the list? Feel free to write it in the comment box below. Thanks for reading.
international story writing