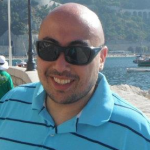 I’m a technical writer and translator from Orlando, Florida. I speak English (native), Modern Standard Arabic (C1), Spanish (B2), and German (B1). I also blog about languages at www.languagesurfer.com.

I grew up multicultural. My dad is from the United States and my mom is from the Philippines. Unfortunately, I don’t speak Filipino, but I heard it around the house growing up and had always been aware that people communicated in different ways. Also, I’ve lived overseas several times—in Japan, Panama, and Germany—so I’ve always wanted to learn how to communicate better with my neighbors.

Right now I’m working on improving my German. I’d like to get up to a C1 level by the end of the year. I have to focus on one language at a time because I really like to “immerse” myself in the language I’m learning as much as possible. My language learning style is high-volume, with a lot of input (i.e., listening and reading), and a good chunk of translation thrown in. I like to put an emphasis on listening because I think that really sets your brain up for true language acquisition—which I cover in-depth in my book Language Master Key.

They’re all challenging in their own way. Arabic has a reputation for being difficult for English speakers. I understand why. It has a difficult script to learn and complex grammar, but once I got over that hurdle, I discovered it was a very logical language and the patterns are consistent from one sentence to the next.

Same thing. I think I picked up Spanish the fastest, but the higher-level grammatical points, such as subjective, can get very tricky. And I still have trouble understanding some dialects, like Chilean or Argentinean. No language is a walk in the park to learn.

After German, I really want to learn Filipino. I’d like to be able to talk to my mom in her own language, and maybe get a deeper insight into a part of my heritage.

Be consistent. Find an approach you like and stick with it. With language learning, progress is never visible in hours or days, but rather weeks and months. No matter which language you choose, expect to have to devote at least a year of consistent effort before you start feeling comfortable using your new skill.

If you have any questions or opinions for Ron, leave your comments below.
arabic english german interview spanish tagalog