Ikonomou said, "You just have to immerse yourself in the language and the culture. It’s easier now with the internet and satellite television." For instance, when he was learning Polish, he cooked Polish pierogies, read Polish newspapers, and watched Polish television. Besides, he always travels every chance he gets. He has visited Scandinavia, the Balkans, the Middle East, North Africa, and the former Soviet Union, as well as China, Pakistan, Latin America, Europe, Canada, and the United States. 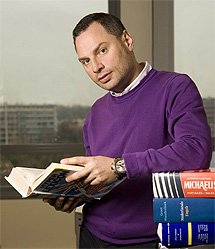 Ioannis Ikonomou was born in Irakleio, Crete, in 1964. He studied linguistics at the University of Thessaloniki before pursuing an MA in Middle Eastern languages and cultures at Columbia University in the United States. He continued with a PhD in Indo-European linguistics at Harvard University. He has been employed as a translator at the European Commission in Brussels since 2002.

Do you know any polyglot or someone who knows several languages? What have you learned from this incredible story? Thanks for reading. Feel free to share this article if you like. If you have any opinions, please leave a comment. I love reading them. If you enjoyed this blog, subscribe it so you will never miss any new article.